Market Express: As January goes, so goes the year? 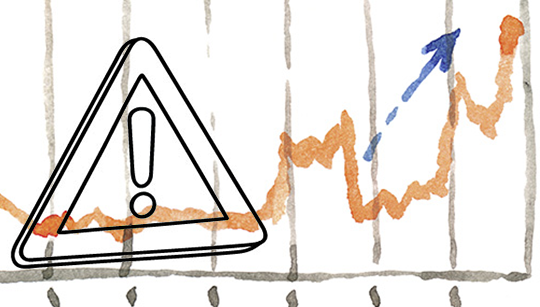 The year has started the way it ended last year, as economic data continued to improve and the positive mood of investors created firm support for risky assets. However, from a behavioural perspective it has also created some warning signs for the near future. We decided to temporarily reduce the equity exposure in our multi-asset portfolios.

Markets jumped off the starting blocks full of energy in the new year. Oil prices continued to increase, inflation expectations firmed, bond yields climbed, credit markets continued to trend up and equity markets even accelerated after an impressive performance last year. In the first two weeks of the year, global equities are up by 2.75% in euro terms, with Japan (+3.6%) leading the way and Developed Asia ex Japan (+0.6%) lagging behind.

The old adage “as January goes, so goes the year” immediately comes to mind. According to Merrill Lynch Research, based on S&P 500 data going back to 1928, January has been a good predictor of full year performance. When January is up, the year is up 80% of the time with an average return of 13.0%. So, from a statistical point of view, although only halfway the month, this means good news for the year ahead of us. However, basing one’s outlook on simply extrapolating two weeks’ market performance is obviously a bit short-sighted. We will once again be scrutinizing corporate, macro and market data in order to distinguish the forest from the trees.

In our investment philosophy we believe it is crucial to monitor the direction of change in both the fundamental and behavioural drivers of markets. If the economy is doing well already, continues to improve and keeps surprising positively, markets will continue to adapt and trend higher. Also, if the underlying fundamentals do not change, but expectations about the future continue to brighten, investor behaviour will drive more capital to the markets and support prices. None of these trends will last forever, but the degree of persistence in these dynamics offers an investment opportunity to add returns to portfolios through active management.

In recent weeks, the remarkably strong conditions in the global economy, persistence in positive surprises in data releases and a sharp improvement of the already positive mood of investors created firm support for risky assets. This again created positive feedback loops into the real economy through easier financial conditions and rising corporate and household sentiment. In addition, further broadening of the global recovery through international trade channels increased the regional participation of the global recovery, which helps to make the current cyclical momentum more resilient. Shortly put, the strongest economic tide in more than a decade seems to be lifting all boats.

Because of the persistently strong economic data, markets are also focussed on signs of policy normalisation by the main central banks. Last week we saw two clear examples of this. On Tuesday, markets reacted strongly to what was essentially a technical monetary policy adjustment by the Bank of Japan (BoJ). The central bank reduced its purchases of longer dated government bonds (beyond 10 years), perhaps because they want that part of the curve to steepen somewhat. This caused the kind of sell-off in 10yr bonds and degree of yen appreciation one normally sees around monetary policy meetings where new information about the future policy stance is signalled. Last Thursday we saw a similarly strong market reaction to the minutes of the ECB’s December meeting. “The language pertaining to various dimensions of the monetary policy stance and forward guidance could be revisited early in the coming year,” the minutes showed, referring to 2018, suggesting that policymakers could soon start preparing markets for the end of the bank’s stimulus programme. As a result, German Bund yields jumped and the euro rose to a 3-year high against the US dollar.

Earnings will be key for further equity market rises

For equity markets, this environment of gradual monetary policy tightening means that earnings trends will be key, as we do not expect a material rise in valuations. If anything, global price-earnings ratios will likely be lower in 12 months’ time. This is especially valid for the US. In Japan and the Eurozone, we might see further multiple expansion given the earlier point in the monetary and earnings cycle.

Last week, the Q4’2017 earnings season kicked off and expectations are high. Since the end of November, expectations were even upgraded, which is unusual. According to consensus figures, the expected rise in earnings is 11.9% on a revenue growth of 14.9%. The biggest expected contributors to earnings growth are Energy (+132% expected year-on-year), Materials (+25%), Technology (+18%) and Financials (+12%). Sectors that are expected to lag are Telecommunication Services (-0.6%), Consumer Discretionary (+2.9%) and Industrials (+2.2%). The main drivers are the economic recovery, US dollar weakness and a positive impact of rising commodity prices on the earnings of the energy and materials sectors.

Global earnings momentum (earnings estimate upgrades minus downgrades) has continuously risen to currently the highest level in two years. The biggest jump in this earnings outlook is attributable to emerging markets and the US. The sooner-than-expected approval of the US tax plan, which will lower the nominal corporate tax rate from 35% to 21%, is undoubtedly the biggest driver of the increase in US earnings momentum, which has also risen to the highest level in two years. In absolute levels, we expect global earnings growth to be in the low double digits in 2018. Given our doubts about higher price-earnings, we expect the return outlook for global equities to be capped by this growth level.

From a fundamental point of view, the macroeconomic and earnings outlook creates a very constructive message for markets in 2018. At the same time, from a behavioural perspective, it has also created some warning signs for the near future, say the next couple of weeks. Especially with respect to global equity markets, investor sentiment or broader measures of positive market emotion seem to have reached unusually high levels. The chart above shows that the Bulls-minus-Bears ratio reached the highest level since 2010 in the first week of January. We see these levels of sentiment metrics as a sign that some behavioural headwinds could start to blow temporarily as a reversal from peaks of optimism eventually materializes. Not something that is likely to derail the underlying economy, but it could limit near-term upside or cause a bout of volatility for a couple of days or weeks.

This is not a reason for us to deviate from our allocation stance that is cautious on government bonds and tilted towards risky assets like cyclical equities and real estate. It is however a trigger to tone down our equity overweight somewhat, as in the next couple of weeks market behaviour could become somewhat more mixed than it has been recently. Hence, we keep sailing on the rising tide of global growth, but tactically tame pace a bit due to some potential crosscurrents ahead.