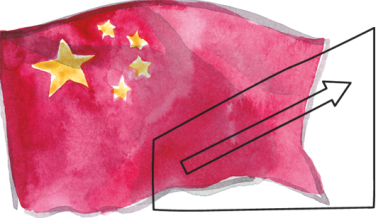 The Chinese economy is gradually shifting from an investment-driven, credit-fuelled growth model to a domestic consumption-led model. Momentum in consumption growth is strong currently, driven by decreasing income inequality and strength in e-commerce. Ongoing urbanisation, seen as a long-term driver for consumption, helps to limit the decline in fixed investment growth and keeps the risk of a sharp slowdown in real estate fairly limited.

1. The focus has clearly changed from high-speed to high-quality growth. High-quality implies growth with lower financial imbalances, with a less negative impact on the environment and with a more equal income distribution. The growth maximisation strategy of the past decades is off the table, but at the same time there is little tolerance of growth falling below 6% in the coming years. The composition of growth continues to change rapidly towards more household consumption, which already counts for over 50% of GDP.

2. Productivity growth is envisaged as the key driver of growth, replacing industrial capacity growth sustained by rapid leverage growth. In the past four years, much progress has been made in reducing the overcapacity problem. After overcapacity reduction, SOE (state-owned enterprises) reform is all about a more efficient use of public capital. The authorities aim to further improve the return on capital through efficiency gains and the involvement of private capital in mixed-ownership structures. In all this, there is a big focus on innovation through more R&D, quality gains in education and attracting the best people from abroad to make fast technological gains. Meanwhile, progress is made in labour mobility, business-friendly regulation and – the government claims (but little evidence is there yet) – in property rights protection and a better rule of law. The omnipresent aim of all these reform efforts is to boost private investment in the most innovative, high-tech sectors.

3. High leverage growth is no longer required or desired to sustain economic growth. In the past years, leverage growth has come down substantially and in the past two quarters it has no longer increased. Apart from reducing the pace of credit growth, the authorities are trying to solve the leverage problem by helping the highly indebted SOE sector to achieve higher asset returns. So far this year, SOEs have been able to pay back debt thanks to improved profitability.

4. Rapid urbanisation growth continues, despite the massive migration of people from the rural areas in the past decades. The government sees urbanisation as a key means of boosting consumption. Urbanisation keeps driving demand for real estate and sustains high infrastructure investment growth.

5. The focus on environmental protection and energy efficiency of the past years has already paid off, as we experienced in Beijing. The air appeared much cleaner than it was during all our earlier visits. But ambitions remain high, which is reflected by the fact that the environment was mentioned in every single presentation we assisted. One concrete example is that by 2020 all public buses in the entire country will be 100% electric.

6. Income distribution is improving. This is visible in the Chinese statistics and in the GINI coefficient as published by the World Bank, which has fallen by 3 points since 2008. The improvement results from the anti-corruption campaign, large investments in education and healthcare, and sizeable subsidy programmes for the rural areas. Lower inequality has been a major force behind the strength in household consumption growth and the surge in e-commerce.

7. Fiscal reform continues. The discipline on local governments is being tightened more. Incentives for leaders on a provincial or city level are changing. Before 2013, it was mainly on growth where local authorities could score points. Beating growth targets was their main objective. The central government now also looks, perhaps more primarily, at environmental, financial health and income distribution goals. We also learned that tax reform will move more in the direction of direct taxes to influence consumption. One key example is a nation-wide property tax, which has been talked about for decades and now seems to be on its way.

8. The Belt-and-Road initiative is much more than a scheme to make use of China’s industrial overcapacity. It is also about securing strategic supply of key commodities and future demand for Chinese products. The government sees the Belt-and-Road programme as a new globalised system alongside the existing one that is considered to exist primarily to satisfy the needs of the West. The idea is to eventually use the renminbi for trade settlement and cross-border investment.

The main risk lies in the real estate sector. Until now, the slowdown has been manageable, and this could continue thanks to the high genuine demand growth for housing, linked to urbanisation and high household income growth. But the measures to fight speculation remain strict and these could affect overall sales more than they have done so far. All in all, we stick to our view of a moderate economic slowdown. Yet, our visit has given us a bit more confidence in the policy efforts to deal with the leverage problem and with the prospects for consumption growth. This means that the downside risk to our moderate-slowdown scenario is rather low. We forecast GDP growth to come down from 6.8% in 2017 to 6.3% in 2018.

The improved market perception of China risk and the increased confidence in the strengthened focus of the Chinese authorities on economic reforms are reflected in the strong performance of Chinese equities this year, as can be seen in the chart above. Especially the new-economy stocks in the Chinese market have performed strongly. The e-commerce and internet theme has been so powerful that the tech sector rapidly gains importance in a global emerging markets context. Information Technology now represents almost 30% of the MSCI Emerging Markets index. This development is changing the aggregate sensitivities of the EM equity category. Whereas in the past EM equity was often seen as a commodity play, it now has become a play on global IT trends and on Chinese consumption.