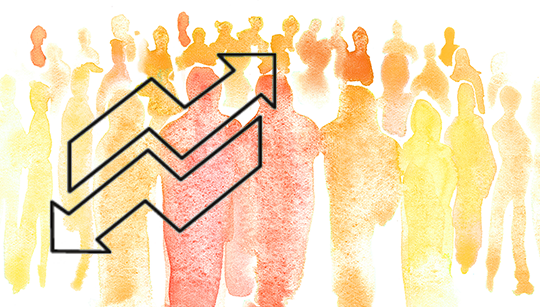 Market volatility is clearly on the rise, with a US president who seems to be gearing up for a trade war and global earnings momentum turning down after reaching its highest point in two years.

Investors have reacted strongly to higher US import tariffs on steel and aluminium. President Trump has toned his rhetoric somewhat down – Mexico and Canada are exempt from the tariff increases – but his protectionist stance has fuelled fears of a tit-for-tat trade war with the EU and China. US protectionism could become a game-changer for equity markets. Moreover, global earnings momentum has come down and economic data releases increasingly struggle to beat ever-optimistic expectations. Investors also have to take into account that the robust global economy has lost steam as a locomotive for markets. Although we don’t expect a major correction (>10%), this climate requires a more cautious stance.

Market volatility is on the rise

Market volatility is clearly on the rise, with a US president who seems to be gearing up for a trade war and global earnings momentum turning down after reaching its highest point in two years. Increased volatility is visible not only in the doubling of the VIX index level, but also in the realised volatility. Since early February, the number of days that the MSCI World index has moved more than 1% (in local currencies) has already exceeded the total for all of 2017.

It is difficult to assess how far Donald Trump will take his trade war rhetoric. The resignation of Trump’s top economic adviser, Gary Cohn, is broadly seen as a bad sign. A full-blown trade war would have no real winners and is without exception bad news for equities. Numerous US companies have thrived on globalisation; more than 40% of S&P500 revenues are generated outside the US. Non-US markets are even more vulnerable.

Global earnings momentum has come down

We may already have passed the sweet spot for equities this month. Our global cycle indicator weakened further and global earnings momentum has come down, primarily driven by the Eurozone and emerging markets. Economic data releases have started to struggle to beat ever-optimistic expectations, and corporate analysts have stopped upgrading their expectations for future earnings growth in most regions.

In addition, a number of policy tailwinds are abating. US fiscal policy, trade policy and monetary policy are becoming less supportive. Last week, the ECB moved slightly closer to the end of its purchasing programme by dropping its commitment to increase purchases if the economic outlook deteriorates.

We are not heading for a bear market

We are by no means heading towards a bear market and even a major correction (>10%) looks unlikely. For a bear market to emerge, recession risk would need to rise substantially, something we don’t expect for the next 12 to 18 months. Credit would also be weakening if this were the case. For a substantial correction to occur, we would have to see more investor exuberance. This is a big change relative to the market sentiment earlier in the year, which showed high levels of optimism and high risky asset exposure. This resulted in a technically-driven sell-off in early February.

In view of these observations we have decided to cut our equities overweight from medium to small. The overweight is still justified by the persistently-high levels of macro and earnings growth and the absence of investor exuberance or extreme positioning. In contrast, our positioning data shows that investors are heavily underweighted in treasuries. This, in combination with the shift in our cycle indicator, has led us to reduce the underweight in treasuries from medium to small.

The US president’s political sabre rattling has already led to reactions from the EU. China has made it clear that it doesn’t want a trade war with the US, but will not allow its economy to be hurt by US protectionist measures.
Last week, China’s National People’s Congress started its annual session. The government confirmed its focus on reducing financial-system risks, increasing the quality of growth, while maintaining its GDP growth targets unchanged.

All in all, the Chinese economic picture remains rather good, with a limited risk of a substantial growth slowdown in the short term and financial-system risk continuing to decline. The key thing to watch is global trade. If Chinese export growth were to come down faster than currently anticipated (for cyclical reasons and possibly protectionism reasons as well), the authorities in Beijing would need to consider new options to ease economic policy without allowing the quality of growth to deteriorate again.