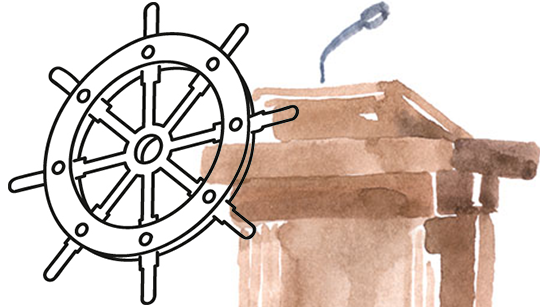 Political noise has taken over the role as a major market driver now that economic momentum has faded in the past months. Evidence of ongoing economic strength, a good earnings season and a cooling down of trade tensions are probably needed before new market opportunities arise. Until then, we feel comfortable with our close-to-neutral asset allocation stance.

Recent years have shown again and again that as long as the underlying economy remains strong and continues to move forward, limited lasting damage will be done by political turmoil.

Other forces than fundamentals take over the steering wheel

Over the last two years most political drama was easily digested by markets. No matter how disturbing election outcomes, referendum votes or policy announcements were, equities and other risky assets never really departed from their uptrend. Whatever the narratives were to explain this resilience at the time, the most recurring theme in all these stories was simply that underlying economic conditions continued to improve and kept outpacing market expectations. That environment seems to have disappeared for now, as leading indicators have started to roll over and economic data are now surprising on the downside (see chart). It is all aligned with a global economy that is stabilizing at a healthy level, but for markets it is important that the marginal change of the global business cycle is no longer positive. Since markets re-price their assessment of the economic outlook constantly, lack of signs of further improvements in that outlook limits their ability to climb further. It does not necessarily push them down, but it does increase the probability that other forces than economic fundamentals will drive their direction.

Political noise is weighing, but expected to fade again

Politics is one of those forces. The increased tensions between the US and Russia and the threats of trade tariffs mainly exchanged by the US and China are notable examples of political drama that can drive noise and direction in the market arena. How long this will weigh is hard to say. It seems unlikely that the tensions with Russia will fade quickly, but at the same time they do not affect market sentiment as much as the US-China trade tensions. Thinking of the incentives that drive leadership in both the US and China it still seems likely that a pragmatic deal over new trade relations is found in the coming months. Both want to have healthy economies and therefore like to prevent a damaging downward spiral in tit-for-tat trade restrictions that have the potential to pull the business cycle down.

China is publically stressing its preference to keep trade as open as possible, emphasised by comments from President Xi that he will lower trade barriers for financial services and cars. It is in China’s interest to make some concessions. Xi’s strategic plan for the economy crucially involves the opening up of part of the service and financial sectors. Therefore, China could lower tariff barriers on its manufacturing sector, reform its ‘enforced technology transfer’ model and reduce the aforementioned service sector barriers. In this respect, Xi’s long-awaited speech last week sounded pretty conciliatory. In return, the US could promise not to carry out the intended tariffs and roll back the steel and aluminium tariffs. The big risk from the US side is that the US government will go for quick results (i.e., a sharp short-term reduction in the trade deficit) which is clearly not feasible and may lead to further tensions. The extent to which Trump will go for quick gains remains uncertain and could be a function of pressure from free-trader Republicans in Congress and even the stock market reaction.

One also has to wonder which of the two sides, US or China, has the stronger hand in the negotiations. True, the US imports far more products from China than the other way around (USD 500bn vs. USD 130bn), but the political pain of an escalating trade war may be much harder to digest for Trump than for Xi. With the Congressional mid-term elections coming up in November and a rising likelihood that the Democrats can regain the House and maybe even the Senate, it will be very risky to set a trade policy in place that might drive down both the equity market and the business cycle over the coming months. Such a correction would also bite in China, but the political consequences for President Xi will be far more contained as he has just established a stronger grip on power than ever before by basically being allowed to stay in office for the rest of his life.

All in all, the trade world has become a more dangerous place than it was as China and the US are engaged in a risky trade game which could lead to a cascade of retaliatory measures. In addition, there are risks in other US trade relationships too. As it is in the rational interest of all players to come to a peaceful solution, this remains our base case but the risks clearly deserve to be watched carefully.

The power of politics to drive markets is back for now, but it remains to be seen how long it lasts. Recent years have shown again and again that as long as the underlying economy remains strong and continues to move forward, limited lasting damage will be done by political turmoil. At the same time, we know that once implemented policies start to have a real impact on the prospects for growth and other positive growth factors start to fade, markets will notice it. Our base case remains that resilience in the global economy will win out during the year. We still think that after a period of weaker data, the global economy will stabilize at a robust level. Strong labour markets, healthy consumer confidence and US fiscal spending are key support factors in this respect.

Another factor which may provide some support is the earnings season that started last week. The expectations for first quarter earnings are high; we think that on a global level, earnings-per-share can grow with more than 20% relative to the first quarter of last year. Driving forces behind the earnings growth are global growth, a higher oil price, a weaker US dollar, and US tax reform. The energy sector, for example, is expected to have increased earnings by more than 70%. The materials, technology and financial sectors are also expected to major drivers of global earnings growth. A strong earnings season should at least partially alleviate some of the other more worrying themes on investors’ minds.

Comfortable with our near-neutral allocation stance

All in all, we will likely have to see evidence of ongoing economic strength, good corporate earnings growth as well as calm down on the trade tensions before new opportunities in markets arise. Equity and credit valuations have adjusted in the past few weeks, not necessarily to lower expectations or a worsening economic outlook, but rather to more uncertainty and higher volatility. And although valuations have come down, we feel it is too early to increase our risk exposure. Investor sentiment has returned to more neutral levels and dynamic positioning of active investors has come down, but the flow picture for equities remains soft. Market behavioural indicators for spread products have weakened, such as sentiment and momentum. Investment flows continue to show weakness on the ETF side, especially in high yield, while institutional investor flows are showing signs of stabilization. Overall, behavioural indicators are keeping us comfortable with our current positioning with the underweight in spread products as the only active tactical asset allocation call.