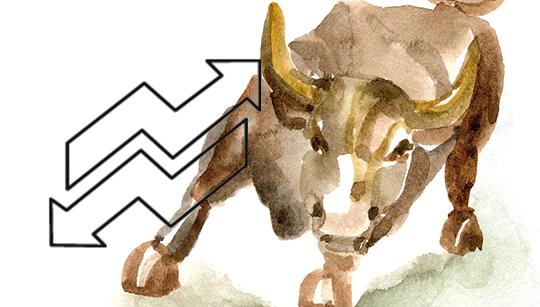 Most asset classes went through a recent soft patch, but no clear catalyst can be identified. Some investors probably could not stand the heat and got out of the kitchen.

Markets took a noticeable turn during the past week. All asset classes except real estate declined. No fundamental catalyst was present, which makes us think these moves are merely technical and temporary. Some of the moves were outright strange. For example, during a period of rising treasury yields, why would bond proxies like real estate outperform equities? Why is US high yield not responding positively to the rise in the oil price?

No signs of fundamental change

Equity markets went through a soft patch in the past week, along with most other asset classes. The weakness in European equities and cyclical sectors was especially conspicuous. Did something fundamentally change? We think not. The macroeconomic data remain strong, as was illustrated by  strong German third-quarter GDP data. Business and consumer confidence also remain high. At the same time, there is no sign of inflation, which gives central banks room to pursue a very gradual and predictable exit strategy. The earnings side remains strong, reflected in good Q3 earnings, especially in the US and Japan. The 2018 global earnings momentum has also improved further. Finally, the equity risk premium is still attractive, especially in comparison with the risk premiums currently on offer in credit space (see chart).

So what changed? A first observation is that the credit market was also confronted with chilly headwinds. Of course, this asset class has become vulnerable to bad news about monetary policy, or about corporate and emerging market fundamentals. Its low risk premiums and tight valuations leave little room for disappointment. Doubts about US tax reform and some anxiety about future Fed policy led to outflows. Limited liquidity in this asset class may have exaggerated the move in spreads. At the same time, an overweight credit position is one of the most crowded trades, which makes it extra vulnerable to profit-taking. In view of the large increase in the financial leverage of US companies, contagion might pop up first in this area of the market. This is illustrated by the underperformance of highly leveraged in relation to companies that are less leveraged.

A second observation is the widespread consensus and the fear of missing out that is currently dominating investor thinking. Cash levels have dropped to the lowest level since October 2013 and the equity exposure is the highest since April 2015. Strangely enough, the number of investors that think that the equity market is overvalued has also risen to the highest level on record, comparable with the end of the previous century. We could say that the fear of missing out is currently a strong force driving investors reluctantly into equities. These unwilling bulls could get scared and run for the exit at the slightest breeze. Our own risk aversion index has also fallen to low figures. The driving force into equities was also visible in the monthly fund manager survey. Despite a growing number of investors who see the equity market as overvalued, equity allocations are at their highest in recent years.

The consensus is equally strong when we look at sectors and regions. The three most overweight sectors are technology, financials and consumer discretionary, whereas the least favoured sectors are consumer staples, utilities and telecoms. From a regional point of view, the preference for non-US markets is widespread. During the past week, we saw the consensus overweights underperform the consensus underweights. In this respect, it was strange that in a week of rising bond yields, bond proxies like utilities and also real estate outperformed financials. This behaviour is totally opposite to what we have seen before and to what is fundamentally justified. As there is no fundamental justification for this sudden shift in investor preferences, we think this is a temporary phenomenon. For this reason we keep our current sector allocation, which is tilted towards a gradual rise in bond yields and cyclical strength.

Fed rate expectations have been moving upwards since early September, based on trends in Fed fund futures, and the resulting pressure on global credit has included emerging market debt. Within EMD, the hard-currency segments have quickly closed the gap with local-currency debt. The overall EMD picture does not look very different from high-yield debt in developed markets. This confirms our view that the nervousness in EM debt markets since September can be explained primarily by deteriorating Fed expectations.

We do not see a clear endogenous EM justification for the correction. After years of large inflows, positioning in EMD is not light, but the same can be said about other credit categories. So EMD moving down in line with developed market high yield makes sense, although this could change if Fed rate hike expectations were to move much further. EM is more sensitive to US interest rates through potential capital outflows that can feed on themselves, create market unrest and eventually cause a sharp tightening in EM financial conditions.

The moves in Fed fund futures have so far been too small to cause big capital outflows. Overall flows to EM have been remarkably resilient in recent months, contrary to what one might expect in the current environment. The best proof of this is in capital flows to Turkey, one of the emerging economies with the largest external financing requirements and the highest sensitivity to US interest rates. In the past months, Turkish assets have been hit hard by the rising Fed rate expectations. Local bond yields have risen by more than 2 percentage points and Turkish equities have underperformed global emerging markets by 17 percentage points. Nonetheless, aggregate capital flows to Turkey have not deteriorated.

With our gradual Fed view of two rate hikes in 2018, we do not see a good reason for EM risk appetite to deteriorate much from current levels. Of course, there are country-specific worries – Venezuela and Turkey come first to mind – but these are isolated cases of poor economic management in combination with high political risk. The EM universe as a whole is in reasonable shape, with its positive growth momentum, reduced external imbalances and support from high global trade growth.

Despite the recent nervousness in emerging markets, linked to the deterioration in Fed expectations since September, EM growth data is holding up well. It is still too early days to see a meaningful impact of higher EM bond yields on EM credit growth, let alone on consumption and corporate investments. Between mid-September and mid-November, EM bond yields have risen by some 30 bps on average. This is still substantially less than the widening of 50 bps the same time last year, around the Trump election shock.

The recent improvement in our own EM growth momentum indicator suggests that we need to see a much sharper uptick in EM yields before getting worried about the short-to-medium-term EM growth prospects. This could happen in case of a miraculous passing of a ground-breaking US tax reform, or if Trump should appoint several hawkish Fed governors. For now, this remains a risk scenario.