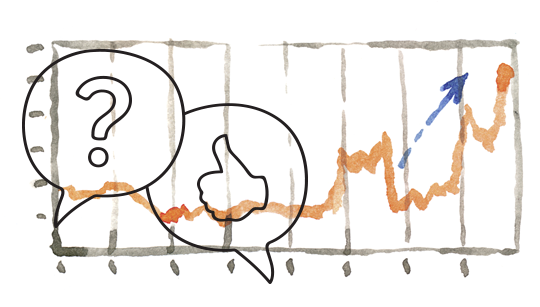 Despite political risk factors in the US and elsewhere on the worldwide stage, market confidence in the global economic outlook is maintaining the upper hand for now.

Investor confidence in the global growth outlook and in continued accommodative monetary policy is keeping markets resilient in the face of persistent political risks. The environment is ideal for corporates, whose healthy balance sheets and favourable earnings outlooks may mean higher dividend pay-outs. On currency markets, room for further US dollar weakness looks limited.

Equity markets are showing considerable resilience amid persistent political tensions. Aside from two recent brief spikes related to North Korea and US domestic politics, implied volatility for the S&P 500 index has remained low, and on both of those occasions, the negative market reaction was short-lived. In the past, such a low-volatility environment may have been seen as a sign of investor complacency, one that called for scaling back risk. This year, an excessive focus on low volatility levels would have led to missed opportunities, or even significant losses for those who speculated on a rise in volatility.

In the US, Donald Trump’s recent words and actions have had the effect of highlighting his administration’s shortcomings. His response to the protests and fatal attack in Charlottesville, the disbanding of high-profile business councils, the continuing resignations of top aides, the “new” Afghanistan policy and the ongoing dispute about the border wall all reinforce the image of a president who is becoming increasingly isolated.

These negatives are tempered somewhat by the ongoing hope of tax reform, but little tangible progress is evident on that front either. In the international arena, the North Korean tensions that were centre stage two weeks ago have not gone away but have moved a bit to the background. While the Korea situation remains an open question, the fact that the it has not immediately deteriorated further has been enough for risk appetite to recover and for markets to regain their footing.

The resilience that markets are displaying in the face of this apparent turmoil has much to do with confidence in the economic growth outlook, and confidence that central banks will maintain accommodative monetary policies. Economic data are strong and global growth has been revised higher. The August Flash PMI data for the Eurozone and Japan were above expectations. At the same time, inflation remains puzzlingly low and the link between employment and wages seems broken. This affords central bankers the luxury of adopting a very gradual approach towards monetary tightening. In the Eurozone, the appreciation of the euro could imply an even more gradual path by the ECB than anticipated a couple of months ago.

On balance this is good news for corporates. Global earnings growth has turned positive and the outlook for the rest of the year and for 2018 is encouraging. The acceleration in global growth and the lack of cost pressures have boosted margins. Earnings momentum has faded over the past quarter but remains positive in the US, Japan and emerging markets. European earnings estimates have been downgraded, most likely a direct impact of the strength of the euro. This earnings profile is certainly a factor that keeps investors confident enough to maintain their equity holdings and to buy on dips, should they occur.

Companies are also cash-rich and their balance sheets are in decent shape. Coupled with the earnings outlook, this makes a further improvement in shareholder remuneration likely. Even though the dividend pay-out ratio is currently somewhat above its long-term average, we think companies may raise their dividends in line with earnings, implying 10% dividend growth over the coming period. The current trailing dividend yield is 2.4% globally and even 3.1% for Eurozone companies. These are attractive levels that are a better income proposition than corporate bonds, which will moreover lose the tailwind of the ECB’s bond purchasing program.

All in all, the environment remains very much of the “goldilocks” variety, which helps explain the resilience of markets to political risk events. The biggest danger could lie in a policy mistake by central banks, but investor confidence in them is high. However, we should keep in mind that we are only one misinterpreted central bank comment or meeting away from a “taper tantrum”.

The pace of broad-based US dollar weakening has slowed down this month. After an 8% trade-weighted depreciation since the end of last December, this could of course just be some consolidation, and some further USD weakness might lie ahead of us, according to some market observers. The most often-heard reasons are soft US inflation resulting in a dovish Fed, and US political uncertainty.

US inflation has surprised on the downside for the last five months but we would argue that this is well-priced. Based on overnight index swaps and Fed fund futures, the market is now only pricing in one Fed rate hike until the end of 2018, which seems very modest. What’s more, weaker-than-expected inflation is also a phenomenon in many other countries, implying a more dovish stance by other central banks as well.

Just as important is the observation that there is no clear link between central bank rates and the currency. The Euro-US 2-year swap rate differential has moved down by about 100 basis points since the start of 2015 without resulting in a lower EUR/USD exchange rate. On a daily/weekly basis, the correlation is fairly high, but on a somewhat longer time horizon, the impact of nominal 2-year rates on the currency is limited.

“Trump reflation” may already be priced out

The political disorder in the US may indeed have reduced the likelihood of “Trump reflation” further, but in our view, little or no Trump reflation was priced in any more. If one looks at forecasts for 2018 US GDP growth, one sees that the consensus forecast jumped by 0.2 percentage point after the US election to 2.3%. Since then, the forecast has stayed at this number. This might suggest that not much Trump reflation has been priced out.

However, economic data this year have surprised to the upside in the US and in many other countries, and forecasts for 2018 GDP growth have gone up by about 0.2 percentage point for many countries this year. So it seems that the stable 2018 GDP growth forecast for the US is the result of pricing out Trump reflation and pricing in better US economic data.

To summarize, we are not convinced that soft US inflation data and political uncertainty will push the US dollar lower going forward. In our view, these two developments are largely priced in by now. In fact, looking at our preferred rate spread, the 10-year real rate, it seems that EUR/USD has overshot already, a view supported by the extended short USD positions. Notwithstanding possible “bandwagon” effects of markets embracing the theme of US dollar weakness, room for further US dollar weakness looks limited.